Wow, then. How good was that? The 2019 Tour de France will be remembered as one of the more remarkable Grand Tours, top shelf fare, certainly by recent TdF standards which have paled in comparison to the Giro and Vuelta. But not this time. As always there were the race’s official winners, as well as plenty of unofficial winners who will still be more than satisfied with their three weeks of work across Belgium and France. Below you can see our (unofficial!) final points tally based on Stage and Overall placings across all the main jerseys/categories for the entire race. Scroll down, and we’ve also included a little commentary with our thoughts on each team’s performance, as well as a rating out of 10. Did we get it right? Let us know! 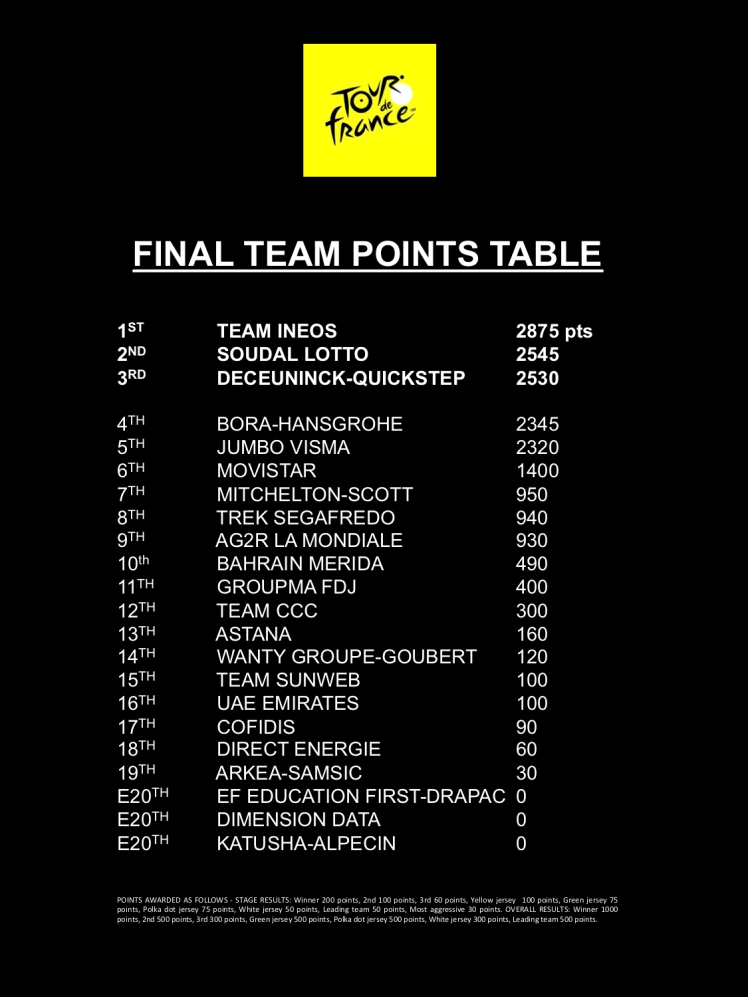 For the best part of three weeks, 2019 was a very different story for the Brits, yet it ultimately delivered a familiar ending with two riders standing on the final podium in Paris. They played the long game, bided their time, and they won. Most impressive was the fact they were able to do it with several of their support riders seemingly well below their best. Also worth remembering they lost their original GC man, Froome, to a serious crash before the race even began. Throw Carapaz into the mix in 2020 and who’s to say they won’t do it again. Oh, and Bernal is only 22. Just sayin.

Wellens had an extended run in polka-dots. De Gendt nabbed a hugely deserved stage win in Saint-Etienne. While, after several narrow misses in the first week, Caleb Ewan ended up with three wins to announce his arrival on the sport’s biggest stage. The Gorilla may be gone, but the future seems very, very bright. A near-perfect Tour.

Multiple stage wins. Multiple yellow jerseys. But, ultimately, a case of so close yet so far. Julian Alaphilippe delivered the Cinderella storyline of the entire tour – and nearly made it all the way to Paris. It’s fair to say 2019 unfolded beyond the Belgian squad’s wildest dreams. Throw in Viviani’s win on stage 4 and Mas’ performances across the entire three weeks and it couldn’t have gone much better for the Wolfpack. Will this change their focus in future Tours? It’s unlikely, but who knows?

A breakout tour for the Dutch squad that may return even stronger next year. Began brilliantly with multiple stage wins and days in yellow, and ended with an overall podium in Paris. If not for Van Aerts’ DNF in the time trial, it may have been even better. One future challenge will be how to best balance Groenwegen’s sprint ambitions with the team’s overall GC ambitions. Imagine adding Roglic (and maybe even Dumoulin if the rumours are right) to this squad in 2020!

Prior to 2019, the Australian squad had won just 3 TdF stages in eight years. This time they claimed 4 to make it a rudely successful French foray. The irony is the prize they originally set out for – the GC podium – never looked remotely likely. A fine lesson in resilience and adaptability.

Sagan’s record-breaking seventh green jersey in eight years will rightly take the spotlight. But just as exciting was Buchmann’s emergence as a genuine GC threat, finishing a superb 4th overall. At 26, he’ll get more chances.

On paper this looks like an impressive tour for the Spaniards, with three men in the final top 10, a fine stage win in the Alps on Stage 18 and the overall Team Classification. It’s just that given the cattle (and budget) at their disposal, their goals were so much loftier. Not a disgrace by any stretch, but surely a missed opportunity.

They dreamt big, but ultimately finished pretty much where most people expected. Mid-field. Porte was solid yet never seriously threatened – but at least he finished! Two days in yellow (and white) for Ciccone was an unexpected bonus.

What loomed as a complete train wreck for the French was, ultimately, saved by the polka-dots. Certainly nowhere near what they’d hoped for, but it could have been so much worse.

Weird, weird, weird. Colbrelli was consistent in the sprints. Teuns delivered a surprise stage win early on. Nibali, no doubt tired from his Giro exertions, finally delivered in the Alps. But the drama with Rohan Dennis’ sudden withdrawal was surely the biggest talking point.

What might have been! Threw everything they behind Pinot, who looked like he might just deliver until everything went to shit in the Alps. Sadly that might be as close as Pinot ever gets. Gaudu looks an exciting prospect.

Van Avermaet had a few digs and wore the polka-dots for two days early on, but not much else to really talk about for the men in orange.

In most of the breaks as expected, but didn’t really do much when it mattered. Offredo lost even his grip on the Lantern Rouge on the penultimate stage. On the bright side, Guillaume Martin (12th overall) may have ridden himself into a better team for 2020.

Agitated as they always do (albeit no doubt slightly less ‘agitation’ with Bouhanni left at home.)

A little disappointing, but far from embarrassed.

Barguil was active in the mountains and finished 10th overall. Greipel was thereabouts a few times. Never really threatened, but then again no-one expected them to do much.

Made a few breakaways, yes, and Uran looked stronger as the race went deeper and finished a creditable 7th overall. But in the final analysis, they have precious little to show for the past three weeks. Losing TJ early on didn’t help. Langeveld’s Lantern Rouge seems kind of apt, as a booby prize.

Kristoff almost picked up a stage win in Nancy, but that’s about it. Very little to show for their efforts. They would have hoped for much better. Aru was their top GC man in 14th, almost 30 minutes behind Bernal, while Martin was 45 minutes back in 18th.

Fuglsang was in the wars almost from the get go and Astana struggled to assert any kind of influence, aside perhaps from Lutsenko. Underwhelming.

After putting all its eggs in one basket, losing their GC man Dumoulin pre-race really set Sunweb on its heels and it never really fired a shot. Matthews was thereabouts for green for a while, but faded. A case of what might have been.

While this blog agreed with the pre-race decision to leave Cavendish at home, looking back surely they couldn’t have done any worse with the Manxman in the squad? And at least he would have generated some publicity. A very disappointing 2019.

Started under a cloud with news they were losing their two biggest sponsors for next season, and it only grew darker and darker. Invisible. Hugely disappointing.

The ‘twang’ of imminent doom. No ride for me this morning 😬😞
New (Koori) kit day thanks to @prism.bike & 2015 @naidocweek Artist of the Year @darendunnofficial Funds from every sale help to support Darren’s “Get Black on Your Feet” program. Love it guys 👍🏼
Cheeky fans left some rather interesting road markings at @amstelgoldrace #Wanksy on tour, perhaps 🤔
Out stalking cyclists (and good coffee) this morning in Launceston 📷 for @bicyclingaustralia 👍🏼 Always a pleasure ☕️
First time I’ve ever seen one of these on a bike rack. Nice 👌🏼
Some serious MTB trails outside of Queenstown in Tassie’s west 🤘🏼
Just add cyclists….
Hearing reports the sock police were out with their rulers in Ballarat for the #RoadNats time trials on Wednesday… and not just the elite races 🙄
Lismore getting its bikes on 👌🏼
New year, new skills.
How’s the serenity?
Tourist ride this morning. Loved exploring my home town, it’s easy to take how beautiful it is for granted 🌟🌟🌟🌟🌟