At some stage pretty much every season, usually involving Paul Sherwen, you’ll hear the term ‘Rainbow Curse’ uttered. It supposedly relates to the unconscionable burden that weighs down all UCI World Champions in the year immediately following their glorious triumph, railroading their season. Well, it’s complete bollocks. As we all know the irrepressible Peter Sagan is having one of his finest seasons ever in the rainbow jersey. But admittedly he’s a once-in-a-generation freak, so I scoured the record books and went back another 15 years or so. Not a single reigning World Champion since at least 2002 (and quite possibly longer – I just couldn’t be bothered looking any earlier) has failed to record at least one victory in the ensuing 12 month period.

In recent times, the leanest of rainbow pickings belong to the trio of Philip Gilbert (2012 WC), Alessandro Ballan (WC 2008) and Igor Astarloa (WC 2003). Gilbert didn’t have the best of times in 2013, but the Belgian still managed a stage of the Vuelta. Alessandro Ballan (WC 2008) took a stage win and the overall at the Tour of Poland. While Spaniard Astarloa claimed a solitary stage in the somewhat obscure Brixia Tour in Italy.

After these three riders, the rainbow year returns become considerably greater. Mario Cipollini (WC 2001) helped himself to four stages at the Giro and one at Romandie. Oscar Freire (WC 2004) won three stages and the Overall GC at Tirreno-Adriatico, as well as several smaller races. Cadel Evans (WC 2009) claimed Fleche-Wallonne, plus one stage and the Points Classification at the Giro. He also wore both the pink and yellow jerseys for a day. Rui Costa (WC 2013) won the Overall GC and one stage at the Tour of Switzerland, plus the Overall Points Classification at the Volta Algarve. While just last season Michał Kwiatkowski (WC 2014) landed the Amstel Gold Race and the opening stage prologue at Paris-Nice. Special mention must go to Italy’s Paolo Bettini who followed up his 2006 World Championship with nothing less than…the 2007 World Championship, as well as a stage at the Vuelta and Tour of California.

Assessing the results, one clear pattern that does seem to emerge is for the faster men to perform better in the rainbow jersey than other types of riders.

Mark Cavendish, for example, had a brilliant year as World Champion (after narrowly beating Australia’s Matt Goss in Denmark in 2011). He started by winning two stages in Qatar, then picked up Kuurne-Brussels-Kuurne, then grabbed three stages at the Giro, added three more stages at the TDF including on the Champs Elysees, and finished with three stages at the Tour of Britain. Norway’s Thor Hushovd (WC 2010) won two stages the TDF and wore yellow for seven days, as well as picking up stages at both the Tours of Switzerland and Britain. 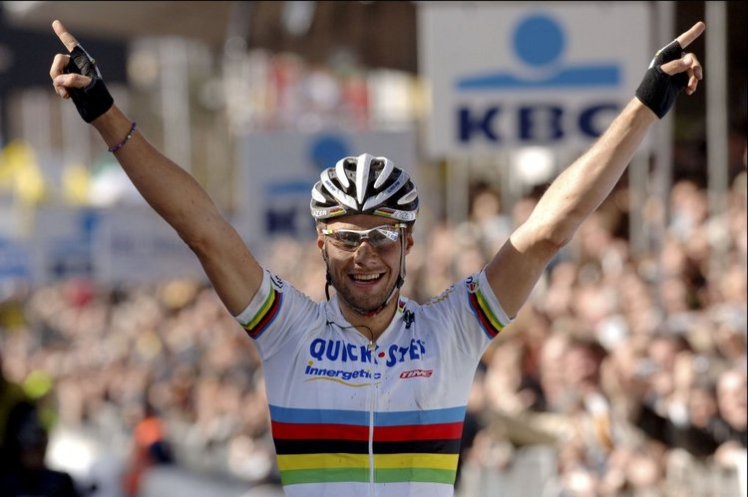 Which brings us to two final World Champions. For you see, as undoubtedly brilliant as Mr Sagan’s 2016 season has been thus far, there is a recent precedent. In 2005 Belgium’s Tom Boonen won the rainbow stripes in Madrid (relegating, as is the norm, Alejandro Valverde to the minor placings). ‘Tommeke’ then followed this up in 2006 with a remarkable run of victories including:

On top of his 18 top level wins, Boonen also wore the maillot jaune for four stages in July 2006. Really the only disappointment he had that season was finishing second at Paris-Roubaix behind Fabian Cancellara.

So how does Mr Sagan compare? Well at the time of writing he’s won the following races this season:

Like Boonen, the Slovakian maestro also wore the maillot jaune for several stages in France. While his tally of individual season wins is still some way behind the Belgian’s, if Sagan can work his magic once again in Qatar next month, surely he will go down as the greatest World Champion of his generation.

Great night for the Aussies at the @criteriumdudauphine Three in the GC top 10 going into the final stage, including @richie_porte on the top step 💪🏼💪🏼💪🏼
Moody morning
For 8 years I’ve been the writer, but this month I’m the ‘talent’, courtesy of a truly wonderful Italian bike I’ve been babysitting for my uncle. Read all about it in @bicyclingaustralia 👌🏼
#BikesOfMudgee 🚴🍁
Strange place for advertising. It seems nutsack sponsorship is a thing in Romandie 🤷
Ride 125km for a free beer? Sure thing! 🍻
🚲 + 🐍
Technically supposed to be a motorbike, but hey, it’s a roo on two wheels .... 🏍🚲🦘🤷‍♂️
First time in Mudgee. Lovely town, even more so with the Autumn leaves 🍁 Now where’s the pub, sorry, I mean bike shop??!
@mudgeeclassic here we come 🚴🥶☕️👍🏼
Good morning. Very good ☀️ 🚴 👍🏼
New toys to review 😍 brand spanking set of @bikebeat_germany AufSTEIGER carbon hoops from @fullbeam_australia Review to come in @bicyclingaustralia 👍🏼👍🏼