Been crunching some numbers to compare the respective track programs of Australia and Great Britain since the 2012 London Olympics Games. The results quite glaringly show what we already know. One nation is outstandingly adept at peaking its athletes for the biggest show on the planet every four years. The other is Australia.

The chart below shows each nation’s results at both the London and Rio Olympic Games (with two events still to be decided on the track in Rio – we’ll update things when they’re finished too). Importantly, it also shows their performances in all 10 Olympic track events at the four UCI World Track Championships in between.

Some of the more interesting observations include:

People can say what they want at Cycling Australia HQ. But over a full four-year cycle (and if we go back to the disastrous Olympics in Beijing it would look even worse!) the raw numbers don’t lie. Something isn’t right. Something needs to change. Otherwise we’ll no doubt be saying the exact same things in Tokyo in 2020 – just with fewer sponsors because the bulk of Australians who only care about cycling during the Olympics will start giving even less of a toss about our great sport. 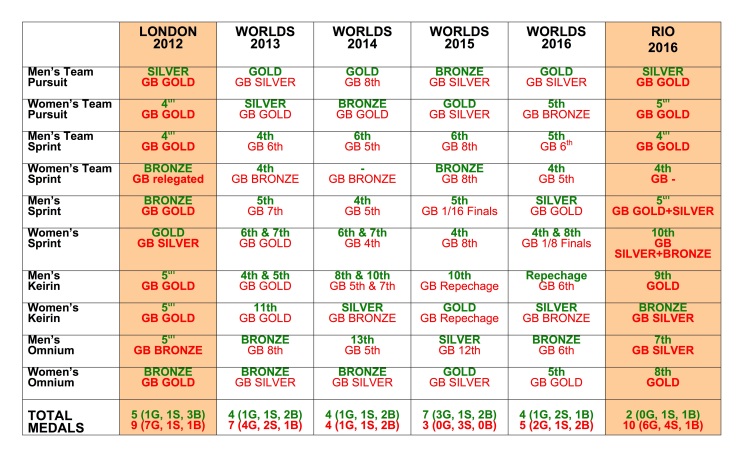 3 thoughts on “The lopsided Ashes of Olympic track cycling”