Sky
A+
Yellow jersey, solid time gains on all major GC rivals, no major incidents, what a difference a year makes. Looked steely in the team time trial. Looks like they have their 2012/13 mojo back. 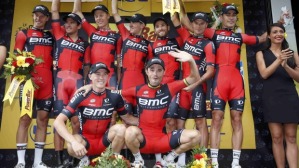 BMC
A+
Two stage wins, a short stint in yellow for Rohan Dennis and their team leader is nestled into second on GC. Andy Riis’ men couldn’t have gone much better so far. Can they keep it up when the roads begin to rise?

Tinkoff-Saxo
A
Strong stuff to date and generally uneventful in a hugely eventful race, which is just what Contador would have wanted. He’s lost a minute to Froome, but he’s still close enough if his legs hold out. Sagan has been his usual consistent self. Barring catastrophe the green jersey looks as good as his once again with the mountains looming – even if he’s yet to win a stage.

Movistar
B
Solid enough form so far from Quintana and Valverde, but with the Columbian two minutes down on Froome will he live to regret the stage 2 time losses in the Netherlands? You get the sense they’re about to try and blow this race apart. But they can’t afford any more slip ups.

Ettix-Quickstep
B
Yellow jersey, multiple stage wins from three different riders. By most teams’ standards it’s an outstanding Tour already. But these guys will want more, much more. Cav in particular will not be enjoying being beaten by Greipel and Sagan. Tony Martin’s first week encapsulates the yin and yang of pro cycling.

AG2R
B-
A stage win to Vuillermoz. But after a poor start, team leaders Bardet and Peraud have continued to look off the pace and find themselves with serious time losses to recoup in the mountains. The only upside is with their GC hopes virtually extinguished they may be free to chase stage wins.

FDJ
C
Oh, no. Pinot. Lost time on multiple stages in the first week and, realistically, saw any chance of a repeat podium in 2015 ride away on the cobbles. He’s had some bad luck, sure. But his lack of composure was a little alarming. Maybe a stage win will ease the pain?

Astana
C-
Terrible first week. Nibali is going to have to ride out of his skin to even get close to challenging by Paris. With the team’s second and third best GC riders resting after the Giro, he’ll have to do much of it alone too. Losing 10 seconds on the stage 8 finish up the Mur de Bratagne was ominous. 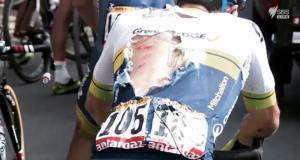 Orica-GreenEDGE
D-
The Aussies are marked down not for a lack of effort, but for some truly wretched luck. More crashes than the NASDAQ. Hopefully the Yates brothers can lift spirits in the mountains. Michael Matthews has shown some serious ticker to still be in the race. Shaping as a year of what might have been at the Tour.

Andre Greipel. Consistently bettering Cav for the first time in a long time.
Adam Hansen. Dislocated shoulder won’t stop him from reaching Paris.
Daniel Teklehaimanot. Rode himself into the history books. The hardest name to pronounce quickly in world cycling?
Lycra manufacturers. So many jerseys and skinsuits has been destroyed on the tarmac, they’ve been working around the clock.

Punchy little gravel climb to end Stage 3 at the @cro_race with @jonasvingegaard taking the win 🇩🇰 🪨 🇭🇷
Even the famously ‘unflappable’ Colombian Nairo Quintana resorted to cable ties to fend off the magpies in Wollongong last week. That'll do us 😂  🌈🐦🌈🐦🌈🐦🌈🐦
8 days 🌈
Surely the only thing that can beat @remco.ev now is a magpie attack!!
Sadly the biggest story from the men’s road race is unlikely to be the men’s road race ☹️👮‍♂️🌈
$351 for @jay_vine3 to win 🌈?
The last 9 elite men’s champions 🌈🌈🌈🌈🌈🌈🌈🌈🌈 Get excited people. This is going to be epic 💥💥💥
Heart = @_g_brown
‘Tearing’ it up Ramah Avenue 🇮🇩 😬
Wasn’t exactly beach weather yesterday for @jhindley_ Thankfully Sunday’s forecast is looking 🌞🏖️👌🏼🇦🇺
@hamishmckenzie1 bloodied after an early crash in the Junior Men’s road race. Battled on to finish 37th 👊🏼
This is Wollongong earlier today. Weather isn’t great, but hoping these racks will have at least a few bikes in them over the weekend. Whilst the vibe amongst those here is great, the crowds seem pretty small. The city centre, in particular, is like a ghost town 🤔