Christmas in Australia is pretty awesome for a road cyclist. An extended break from work. Warm weather. Loads of daylight. And generally a lot less traffic. Unlike our northern hemisphere brethren who are typically cooped up in frigid garages or, at best, spin classes, we can hit the roads to our heart’s content day after day after day, racking up mind boggling kms in the process. Except, that is, when you go on holiday with a large family and a small car. And the bike gets left behind.

I’ve found myself up in south-east Queensland over the past five festive days, visiting family, and had to make the heart-wrenching decision to leave my dearly beloved Colnago at home. Really, it just didn’t seem fair to ask one of the kids to catch the train, and besides as my mum reminded me, ‘we have an exercise bike’. They sure do, and after four days of riding it in a desperate attempt to hold condition that’s been building nicely in the past month, my backside, back and knees are a wreck. 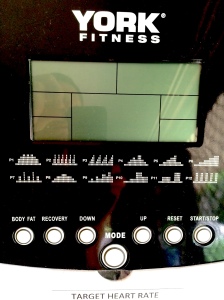 To be fair, as far as exercise bikes go it isn’t a bad one at all. It’s quiet, compact and has all the gadgets you could possibly need, courtesy of a programmable ride computer the size of an ipad: cadence, speed, time, watts, calories, heart rate etc. But as we all know, even the greatest (legal) technology on the planet can’t turn the pedals. Which brings me swiftly to the problem with this home-bound contraption: the riding position.

I’ve sat astride some pretty uncomfortable bikes and trainers in my time, but this thing is truly diabolical for a road cyclist, and with several days of our holidays still to go I must confess to being a bit scared to use it any more for fear of long-term ITB and patella problems – and I doubt even the best bike fit in the universe would help much.

1) The riding position is bolt upright, which is a very odd feeling indeed. It reminds me a bit of those Harley Davidsons you see where the rider’s hands are at shoulder or even head height. Natural it is not. In a largely-futile attempt to normalise the position I’ve been dispensing with the handle bars, and thrusting my arms as far forward as I can, tri-style, riding with my chin pretty much touching the oversized LCD screen. I also considered taking a shift-spanner to the frame to try and flatten out the front end, until I realised it’s all welded firmly in place. Pretty sure dad has an angle grinder in the shed, but not sure that would go down too well. 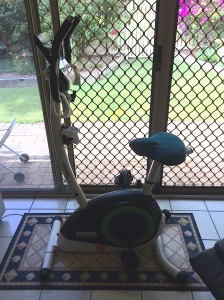 2) The next biomechanical issue stems from what can only be described as a gaping chasm between the pedals which would normally be occupied by your bottom bracket: it’s approximately 25cm wide and, let me tell you, after 30km+ that kind of girth plays all kind of havoc on your knees. I fear I already have minor hip misplacement issues as I feel more like I’ve been riding a horse than a bike.

3) Then finally there’s the saddle. It may be comfy for my mum and dad, but it’s the size of a dinner plate and is about as anatomically suited to my backside as a bag of bricks. I don’t have sore sit bones. I have chaffed hamstrings because that’s how big the bloody thing is. 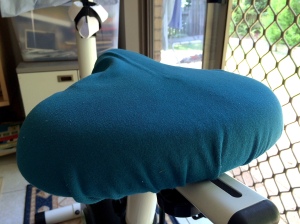 Despite all this, I am well aware that beggars can’t be choosers. I also do my best to abide by Rule #5, even though I’m not sure it applies to exercise bikes. Regardless as a self-confessed cycling addict I need to ride. And I’m sure I will reluctantly straddle this beastly thing once again, as early as today. But next time I think I will get that train ticket for my son. Or perhaps, I guess, I could just get a bigger car.

8 days 🌈
Surely the only thing that can beat @remco.ev now is a magpie attack!!
Sadly the biggest story from the men’s road race is unlikely to be the men’s road race ☹️👮‍♂️🌈
$351 for @jay_vine3 to win 🌈?
The last 9 elite men’s champions 🌈🌈🌈🌈🌈🌈🌈🌈🌈 Get excited people. This is going to be epic 💥💥💥
Heart = @_g_brown
‘Tearing’ it up Ramah Avenue 🇮🇩 😬
Wasn’t exactly beach weather yesterday for @jhindley_ Thankfully Sunday’s forecast is looking 🌞🏖️👌🏼🇦🇺
@hamishmckenzie1 bloodied after an early crash in the Junior Men’s road race. Battled on to finish 37th 👊🏼
This is Wollongong earlier today. Weather isn’t great, but hoping these racks will have at least a few bikes in them over the weekend. Whilst the vibe amongst those here is great, the crowds seem pretty small. The city centre, in particular, is like a ghost town 🤔
Ramah Avenue. It sure ain't flat 🥵
Death. Taxes. Church signs. 😂 🚴🌈 ⛪️