Few sports in the world love an underdog more than cycling. From a local club race or handicap to Monuments and Grand Tours, the odds are so firmly stacked in favour of the raging peloton and its collective might, we find it captivating to see the heroic yet almost inevitably futile efforts of the daily breakaways.

Like a salivating lion playing with an orphaned fawn we know how the story will almost certainly end, for we’ve seen it thousands of times before, yet we ignore our head and listen to our heart, rooting with all our might for those poor souls engaged in the struggle for their sporting survival. Typically the kill is swift and painless, which makes it far easier to accept. But sometimes, as it was the case last night in Nimes, the final blow comes late and oh so cruelly. Perhaps on this rare occasion, we wonder, it won’t come at all? Maybe they will live on forever in glorious victory? Alas, it does. And tears flow for the fallen.

“Sometimes the queen of cycling is very, very unfair on her subjects.”

2) Tony Martin (OPQS)
Stage 6, 2013 Vuelta, 175km, Guijuelo to Caceres – after a truly epic ride the human motorbike was cruelly caught by the surging peloton with just 20 metres to go on the stage. He finished 7th that day, but as we now know Grand Tour victory would ultimately be his, in the form of another heroic solo effort at this year’s Tour de France, where he stayed away in Stage 9. 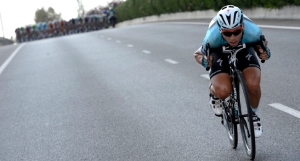 3) Dan Martin (Garmin-Sharp)
2014 Liege-Bastogne-Liege – in something of a harbinger for the 2014 Giro d’Italia, the Irishman crashed while in 3rd place and closing rapidly on the race leaders into the final corner of La Doyene.

4) Christophe Mengin (FDJ)
Stage 6, 2005 Tour de France, 199km, Troyes to Nancy – crashed while leading on the final corner into the finish which, devastatingly, happened to be in his home town.

5) Ted King (Cannondale)
Stage 4, 2013 Tour de France, 25km TTT, Nice – following a Stage 1 crash on Corsica, King suffered badly in the TTT and was dropped within the first 1km. Battling on bravely he finished an agonising seven seconds outside of the time cut but was showed no mercy by organisers. His Tour dream was over. 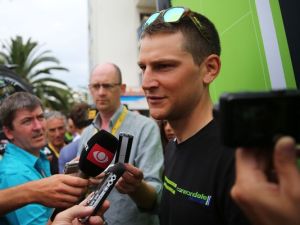 6) Noah Granigan
2014 Tour of Somerville, New Jersey – whilst perhaps not as emotionally damaging as the others (hid did still win, after all) this finish from earlier in the year was certainly a very painful one.