You may not be able to watch the footy on it. Or catch up on the day’s news. But by all reports from local police and insurers, break and enter thieves now see road bikes as the new flat screen televisions – even better, in many ways – as unlike a heavy and awkward 60” telly, they can ride the spoils of their heist away at 30km/h+ whilst barely making a sound.

As I’ve written about before, I know personally of at least four local riders who’ve had their prides and joy stolen this year alone and anecdotally I’ve heard stories of many, many more. One of the ones I know about was a pristine Trek Project One worth in excess of $15,000, it was taken from a security garage in an apartment complex in the early hours of a wet Sunday morning (the favourite weather for many bike thieves, apparently) while another was a virtually brand new Colnago C59 stolen in broad daylight right in front of its incredulous owner at Sydney’s Homebush Bay. He chased them down the road on foot, but hasn’t seen it since.

Regardless of whether they try to hock it off interstate, flog it at the local pub as a complete bike or even strip it down to sell component by component on eBay, that’s quite a payday with little effort or risk for a petty criminal. No wonder it’s proving so popular.

Given for many of us our bikes are likely to be our third or fourth most valuable assets, insurance is clearly a pretty good idea. Of course the catch is to make sure you’re covered for the full value of your bike/s in all circumstances – because as several of my friends have found out the hard way, a lot of policies don’t.

Having spoken to quite a few people on the issue, the other thing that’s generally asking for trouble is to keep your bike in supposedly ‘secure’ garage storage facilities, especially those of the Cyclone fencing wire variety which provide little more than window shopping opportunities for aspiring burglars. ‘But we have CCTV in the garage’, you may well say? That’s great, except it seems being on telly strikes about as much fear into the hearts of bike thieves as a 4-year old with a pump-action Nerf gun. My advice? Apologise to your partner profusely and keep your bike in your bedroom.

Another tactic I’ve come across lately is something that’s been used by the car industry for many years: Data Dots, in conjunction with the National Bike Register which is accessible by Crime Stoppers and the various national Police forces.

Not sure about you, but until very recently when a club-mate of mine became involved in distributing Data Dots, I’d never even heard of the National Bike Register. But it really does exist and, as of this morning, it also contains the details of my beloved road and track bikes, complete with unique and microscopic identification numbers everywhere from the frame and seat-post to the stem and wheels. 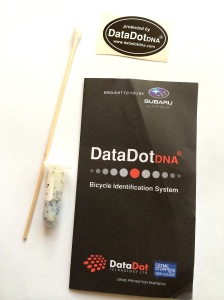 I know what you’re thinking. How will a series of invisible-to-the-naked-eye dots stop a determined and/or desperate thief from nicking your bike in the dark of the night? True, it probably won’t. But similar to those dodgy red and black car steering wheel locks which were of debatable value at best, it may just deter a slightly less motivated thief from taking yours. Of course, it will also make it a lot easier to get the thing back should police happen to stumble across a cache of stolen bike bits when raiding a crack house or crystal meth lab down the track.

Each Data Dot kit costs about $49 delivered and comes with its own unique PIN, applicator and instructions. Depending on how liberal you are with the dots themselves you should have enough for at least two and up to five bikes. Then you just jump on the National Bike Register and register your details, free. It’s pretty simple and only takes about 10 minutes all up.

We spend thousands on our bikes. What’s another $50 to try and protect them?

DISCLOSURE: The local distributor for Data Dots (Nigel from Cruise Control Specialists) is a club-mate of mine in Sydney. Whilst he did provide me with a free sample for the purpose of this review, I received no payment and have no financial interest in the Data Dots venture whatsoever. They just seem like a pretty good idea to me.