Yep, Strava is polarising. Indeed for every cyclist who swears by it there’s another out there more inclined to swear at it, with nothing but contempt for its very existence. By way of full disclosure I should point out, while I have no connection to Strava whatsoever, I fall very much into the former group. Which brings me to the fascinating psychology of kudos. 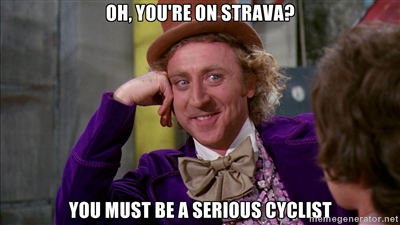 True, it may be little more than a few pixels fashioned into the shape of a thumb. But for those who embrace the theory behind it, it’s also a remarkably motivating force; for whether you’re hurtling along Beach Road at 45km/h in a 50-rider paceline, or grinding out a solo climb in the middle of nowhere, it’s a humble yet powerful reminder that regardless of how much pain you’re in, you are not alone; others are out there watching you, supporting you and, yes, suffering with you. Shortcuts will be noticed, as will an extended absence from the saddle. But so too will epic triumphs and weekend conquests. Top 10? You legend. 32 cups? Good stuff mate. And, seriously, just look at that suffer score!

Forget trying to give me a shove up the Zoncolan. Give me a digital thumbs up instead, that’s the best fillip of all.

In a perfect world there would be no need for such artificial cerebral sustenance of course. We’d all just get out there and do it. But the world ceased being perfect way back when young Adam took that apple. We are inherently flawed and insecure beings and without suitable motivation it can be difficult to sustain our focus on the bike, or in any other facet of life for that matter.

Some amongst us are lucky enough to have a personal coach who performs this role. But for the rest of us I say kudos is king. Long may it reign.

One thought on “Why kudos is king”

🌈🌈 @flanders2021
LOCKDOWN LAMENT:
📰 New issue of @bicyclingaustralia has just come out, with a few things from yours truly, including a great chat about TV coverage in cycling with Dan Lloyd from @globalcyclingnetwork and @miketomalaris from @sbs_australia
With much of Sydney about to be restricted to one hour of outdoor exercise per day, we may be about to see an unofficial ‘Covid hour record’ competition unfold ⏱ Let’s see who can log the most (local) outdoor kms in just 60 minutes 💨
@fabiojakobsen You, sir, are a bloody legend 💪🏼💪🏼💪🏼👏🏼👏🏼👏🏼💥
Trainer tunes 😂 🎙
Just sayin’ 🤷‍♂️
Double the drama?
Nah, not all ‘play equipment’ is closed 🚲 👍🏼
Dear @markcavendish please accept our sincerest apologies. We were wrong. A few years back we were quite vocal in the view that you should cut your losses and retire, for the sake of preserving your wonderful, yet rapidly-tarnishing, legacy. Well, you certainly stuck it up all the doubters last night, us included. Well done, sir. We dip our lid to you. That was quite something 👏🏼👏🏼👏🏼👏🏼
🤬
The things you see out riding 🚲 👻