Scary incident in last night’s Giro stage. The footage isn’t great but as you can see this poor marshal (Angelo Leone, 55) was hit by one of the TV motos and is apparently now in an induced coma in hospital. Hard to make sense of exactly what was going on, but it looks as though there was something just behind this guy on the road surface, hence why he was standing in the middle of the road. As for why the moto rider didn’t see him, who knows? There’s been quite a few incidents already involving the motorbikes in this race. I know it’s Italy, but geez people, take it easy out there. Here’s hoping the guy will be okay. 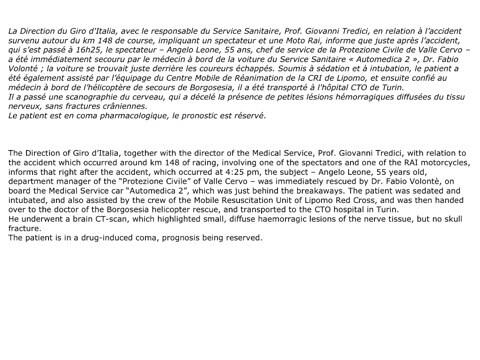 One thought on “Marshal in a coma”