Attended my first ever stage of the Tour Down Under today. And what a stage it was. Following on from an excellent second place at the recent National Championships in Victoria, Cadel Evans took to the Adelaide Hills and did what he does best: prove the doubters wrong.

As Evans left his rivals behind on the asphalt of the infamous Corkscrew Hill – just 2.4km long but an unforgiving beast that, judging by the strained looks and broken bodies on show at the finish line, wreaked havoc on plenty of fine riders today – Evans not only made what was possibly the decisive move of the entire 2014 race, he also franked his belief that after 24 months of heath problems, he’s fast getting back to where he was in 2011. Glorious, history-making 2011.

Having dragged myself over Corkscrew earlier in the day (it hurt – a lot) I now found myself standing about 15m from the stage three finish gantry in Campbelltown, Adelaide, along with thousands of other fans lined four and five deep with flags, fans and, you guessed it, cow bells. It wasn’t France or Italy, but it might have been. Evans’ gravity-defying heroics on one of the region’s most unforgiving climbs whipped the crowd into a patriotic frenzy. Could he get to the KOM kite first? Could he hang on for his first race win in Australia for 12 years?  Could he even take the overall lead from his conqueror at the Nationals, Gerrans? Yes, yes and yes.

Sure, it was only a stage win; one stage of six. There’s also no guarantee Evans will hang on to his lead through to Sunday night. But the fans couldn’t have cared less. As soon as the course was re-opened by officials, there were men, women and kids of all ages charging for the podium, flooding Montacute Road like a scene from Bathurst or a Formula One race. As massive baselines blared out from the PA system, they cheered, they waved, they took photos and countless selfies. The evergreen German Jens Voigt received a cheer almost as big as Evans when he was announced as the days’ most combative rider, having spent much of the stage in a trademark breakaway. It was hard not to be swept up in the party-like atmosphere. 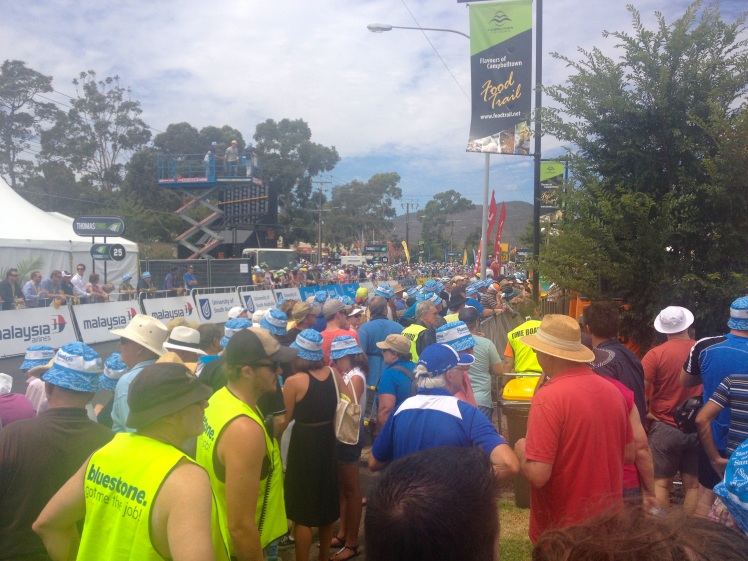 Of course, in a field of over 130 riders, and only one winner, the vast majority of the riders didn’t have anything like the kind of day enjoyed by Evans. This is when the fans in Adelaide showed just how knowledgeable they are when it comes to cycling. Down a small chute, just to left of the finish line and far from the gaze of the television cameras, around a hundred fans or so also waited patiently by the barriers. Not to applaud the triumphant podium getters. But to welcome back the balance of battered and bruised peloton as they made their tired ways to team mini-buses and the waiting arms of soigneurs. It was exhausting just to look at some of these poor souls, the pain of their day’s effort etched deep into their sweaty faces.

Of the vanquished, the Aussie riders drew the biggest cheers of course. Sprinter Mark Renshaw was popular and even managed a smile for a young fan. Uni-SA’s Caleb Ewan drew plenty of applause, despite looking completely shattered and limping back with his left leg heavily bandaged from a fall in an earlier stage. The Drapac boys were well received by the appreciative fans whilst past TDU Champion, Andre Greipel, seemed genuinely touched by the recognition shown to him on what was always destined to be a painful day at the office.

It was a memorable day of riding and spectating. The best part of all? We get to do it all again tomorrow. Just without that corkscrew bit. Then again Willunga Hill on Saturday won’t be much easier….

8 days 🌈
Surely the only thing that can beat @remco.ev now is a magpie attack!!
Sadly the biggest story from the men’s road race is unlikely to be the men’s road race ☹️👮‍♂️🌈
$351 for @jay_vine3 to win 🌈?
The last 9 elite men’s champions 🌈🌈🌈🌈🌈🌈🌈🌈🌈 Get excited people. This is going to be epic 💥💥💥
Heart = @_g_brown
‘Tearing’ it up Ramah Avenue 🇮🇩 😬
Wasn’t exactly beach weather yesterday for @jhindley_ Thankfully Sunday’s forecast is looking 🌞🏖️👌🏼🇦🇺
@hamishmckenzie1 bloodied after an early crash in the Junior Men’s road race. Battled on to finish 37th 👊🏼
This is Wollongong earlier today. Weather isn’t great, but hoping these racks will have at least a few bikes in them over the weekend. Whilst the vibe amongst those here is great, the crowds seem pretty small. The city centre, in particular, is like a ghost town 🤔
Ramah Avenue. It sure ain't flat 🥵
Death. Taxes. Church signs. 😂 🚴🌈 ⛪️