Don’t get me wrong here. Yesterday’s Australian National Championship road race was superb. One of the best afternoons of live sport I’ve watched for ages, delivering an outstanding world-class podium. The presence of Cadel Evans and Richie Porte, coupled with the arrival en masse of Drapac to take things to the ubiquitous Orica-GreenEDGE behemoth, made for a gripping afternoon’s racing.

But as we were immediately reminded by a tweet from dual former National Champion, Robbie McEwen, the challenging circuit around Buninyong makes it virtually impossible for a significant portion of this country’s top riders to ever wear the green and gold stripes as National Champion.

Sure it’s been debated before and will no doubt be debated again. But as the National Championship shouldn’t every elite rider from our nation have a chance to win the thing at some stage in his or her career, whether they be a climber, all rounder or sprinter?

Rapidly emerging sprinter Steele van Hoff (a podium getter in 2013 behind Luke Durbridge) gave it a red hot crack for Garmin-Sharp yesterday, spending the majority of the 183km in the breakaway. But when the whips were really cracking in the last couple of laps, he had Buckleys. Ditto riders like Goss and Matthews as the chasing pack gathered momentum. Lest we forget the Manx Missile’s recently-returned right-hand man, Mark Renshaw, didn’t even enter. Again.

This is not good. Surely these fine Australian riders deserve their chance at more than just the Criterium Championship each January?

Personally, I have no issues with the Nationals staying in Victoria year on year, or even the Ballarat region itself (if a suitable course can be found). They do a tremendous job and deserve to keep it. But I have to agree with McEwen. Mix it up a bit. Share the opportunity. Spread the joy. 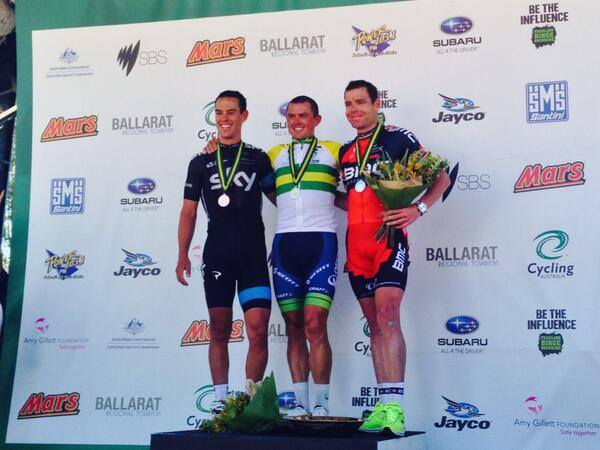 One thought on “Same same”

Same day. Same country. Two very different tales. The agony and the ecstasy of le Tour.
… and it happens again, this time on the biggest stage of them all. Doh! 🤦‍♂️
…and 11 years on, @the_real_cadel has company at the Grand Tour winners’ table. Well bloody done @jhindley_ 🏆🇮🇹👏🏼👏🏼👏🏼
Why so serious? @jay_vine3 takes 2nd on GC in Norway despite a nasty crash on the final stage 🇳🇴 Good stuff Aussie 👏🏼👏🏼👏🏼
Reviews coming soon to @bicyclingaustralia 👍🏼👎🏼
The ‘twang’ of imminent doom. No ride for me this morning 😬😞
New (Koori) kit day thanks to @prism.bike & 2015 @naidocweek Artist of the Year @darendunnofficial Funds from every sale help to support Darren’s “Get Black on Your Feet” program. Love it guys 👍🏼
Cheeky fans left some rather interesting road markings at @amstelgoldrace #Wanksy on tour, perhaps 🤔
Out stalking cyclists (and good coffee) this morning in Launceston 📷 for @bicyclingaustralia 👍🏼 Always a pleasure ☕️
First time I’ve ever seen one of these on a bike rack. Nice 👌🏼
Some serious MTB trails outside of Queenstown in Tassie’s west 🤘🏼
Just add cyclists….