Relief, at last. Just when it appeared he’d run out of chances, and ideas, Philippe Gilbert has finally managed to win his first race in the World Champion’s rainbow jersey… less than a month before he has to give it back in Tuscany (unless, of course he goes back to back).

It was some finish at the Vuelta overnight. Sky’s Edvald Haagen Daaz burst away from the bunch and looked home for all money with 300m to go. But this Belgian is one tough hombre and chased him down to nail the Norwegian on the line. 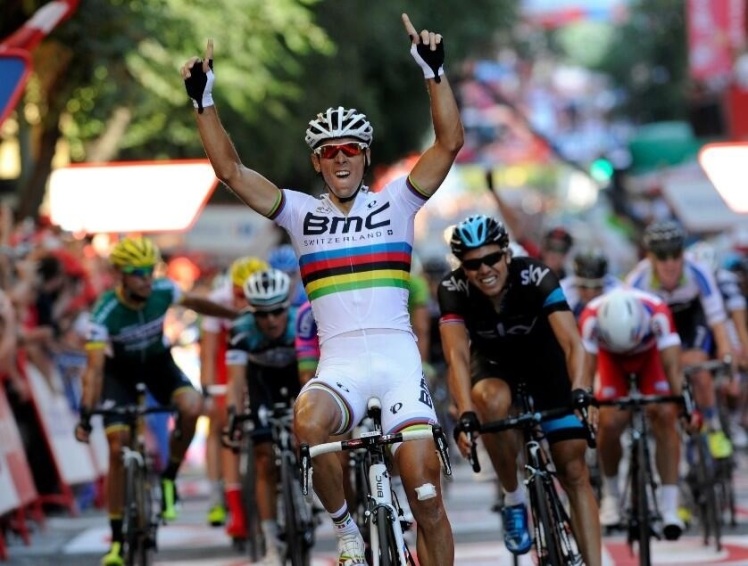 Took the #Tecnos out for a rare spin this morning. Such a beautiful bicycle 👌🏼
☀️☀️☀️☀️ New kit day! First roll in this great summer ensemble from @castellicycling 🖊️ Review soon in @bicyclingaustralia magazine👌🏼
Always good to pin on a number 🚴👌🏼
To quote @betootaadvocate “The f***n jacarandas are back on!”
Had fun shooting the first #ArmoryCrits for the season this evening, glorious weather for it and good numbers, especially in the higher grades 🌞🚴👌🏼
Spotted on a truck this morning in western Sydney. But just as relevant for most bunch rides 🤫
Friday mornings done right ✅
☀️🚴🏄‍♂️
Punchy little gravel climb to end Stage 3 at the @cro_race with @jonasvingegaard taking the win 🇩🇰 🪨 🇭🇷
Even the famously ‘unflappable’ Colombian Nairo Quintana resorted to cable ties to fend off the magpies in Wollongong last week. That'll do us 😂  🌈🐦🌈🐦🌈🐦🌈🐦
8 days 🌈
Surely the only thing that can beat @remco.ev now is a magpie attack!!