We know the pro teams ride the world’s most awesome bikes. But what about their team cars? Despite all the ads during the Tour, not all teams drive Skodas (that said, many do, so it’s not all marketing hype). Given this, I thought I’d take a quick tyre-kicker’s look around some of the non-Skoda wheels in the UCI WorldTour car pool.

(The irony of course is that when fully laden with team bikes, the gear on the roofracks is often worth considerably more than the car underneath it).

You have to give Sky credit. Pretty much every part of their set-up oozes class, including their team cars. When not cruising around in their mega-buses, Mr Brailford’s men in black can be found behind the wheels of the super sexy Jaguar wagon, the XF Sportsbrake, which made its first appearance at the 2012 Tour. In addition to the cars themselves, Jag also provides advanced driver training to all of the Sky Sports Directors so they can preserve energy and have a clear state of mind to make key tactical decisions whilst driving.

No, despite the logo on their backsides, the GreenEDGE boys don’t cruise around in Jayco caravans. Whilst not having quite the same reputation or swagger as the Sky silvertails in their Jags, Subaru seems a perfect fit for this down-to-earth Aussie team. Strong and reliable without being too up itself. Personally, I’ve always loved Subaru, and even owned a Liberty wagon myself for a few years. All wheel-drive delivers great road holding and they’re certainly not short of torque. I’m pretty fond of the XV, which seems to be the wagon of choice for a lot of Aussie cyclists these days. Sadly, I don’t have the money for a new car right now, or I might just buy one. 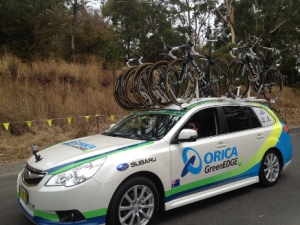 Did you know the first car to drive around Australia was a Citroen? It’s true. Which is pretty much irrelevant to Cannondale Pro Cycling, but a neat bit of trivia all the same. Whilst the team has Italian roots, you won’t find a Fiat or Ferrari in the team garage. Instead the men in lime green have a fleet of quirky French Citroen C5 Tourers at their disposal. Citroen has a bit of reputation for being a polarising brand. Some people love them. Some people hate them. Which when you think about it seems a pretty good match for a team with Mr Sagan in it.

🌈🌈 @flanders2021
LOCKDOWN LAMENT:
📰 New issue of @bicyclingaustralia has just come out, with a few things from yours truly, including a great chat about TV coverage in cycling with Dan Lloyd from @globalcyclingnetwork and @miketomalaris from @sbs_australia
With much of Sydney about to be restricted to one hour of outdoor exercise per day, we may be about to see an unofficial ‘Covid hour record’ competition unfold ⏱ Let’s see who can log the most (local) outdoor kms in just 60 minutes 💨
@fabiojakobsen You, sir, are a bloody legend 💪🏼💪🏼💪🏼👏🏼👏🏼👏🏼💥
Trainer tunes 😂 🎙
Just sayin’ 🤷‍♂️
Double the drama?
Nah, not all ‘play equipment’ is closed 🚲 👍🏼
Dear @markcavendish please accept our sincerest apologies. We were wrong. A few years back we were quite vocal in the view that you should cut your losses and retire, for the sake of preserving your wonderful, yet rapidly-tarnishing, legacy. Well, you certainly stuck it up all the doubters last night, us included. Well done, sir. We dip our lid to you. That was quite something 👏🏼👏🏼👏🏼👏🏼
🤬
The things you see out riding 🚲 👻