Is it the 21 hairpin bends? The chaotic crowds of Dutch Corner? Or the remarkable history of this exclusive ski resort in the French Alps?

Alpe d’Huez first featured in the Tour in 1952 when Italy’s Fausti Coppi triumphed. It will be climbed twice in this year’s race. However, it won’t be the first time riders have climbed it twice in the same Tour. In 1979 the parcours ascended Alpe d’Huez on two occassions – but on different stages.

This most iconic of iconic TDF climbs last featured in 2011 when Frenchman Pierre Rolland won for Team Europcar.

The late Marco Pantani won here twice in the 90s. His victory in the 1997 Tour is reputed to have come in the fastest ever recorded time of just 37 minutes 35 seconds. However a quick Google search reveals plenty of conjecture. And as history now shows, his time was hardly ‘pure’.

Did you know?
Alpe d’Huez hosted the bobsleigh events at the 1968 Grenoble Winter Olympics. 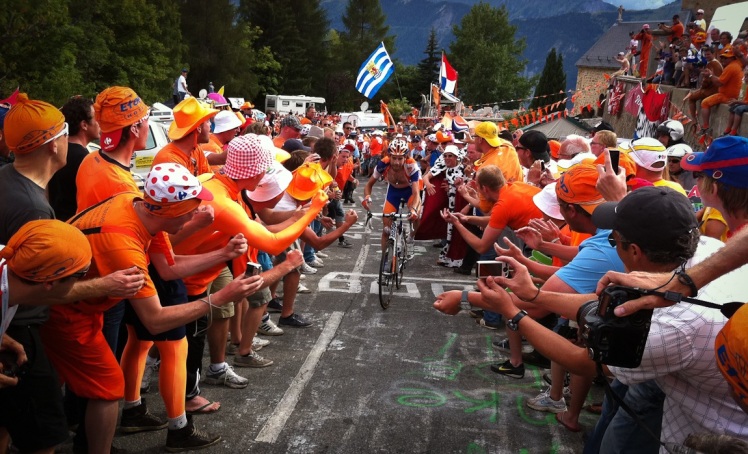 … and it happens again, this time on the biggest stage of them all. Doh! 🤦‍♂️
…and 11 years on, @the_real_cadel has company at the Grand Tour winners’ table. Well bloody done @jhindley_ 🏆🇮🇹👏🏼👏🏼👏🏼
Why so serious? @jay_vine3 takes 2nd on GC in Norway despite a nasty crash on the final stage 🇳🇴 Good stuff Aussie 👏🏼👏🏼👏🏼
Reviews coming soon to @bicyclingaustralia 👍🏼👎🏼
The ‘twang’ of imminent doom. No ride for me this morning 😬😞
New (Koori) kit day thanks to @prism.bike & 2015 @naidocweek Artist of the Year @darendunnofficial Funds from every sale help to support Darren’s “Get Black on Your Feet” program. Love it guys 👍🏼
Cheeky fans left some rather interesting road markings at @amstelgoldrace #Wanksy on tour, perhaps 🤔
Out stalking cyclists (and good coffee) this morning in Launceston 📷 for @bicyclingaustralia 👍🏼 Always a pleasure ☕️
First time I’ve ever seen one of these on a bike rack. Nice 👌🏼
Some serious MTB trails outside of Queenstown in Tassie’s west 🤘🏼
Just add cyclists….
Hearing reports the sock police were out with their rulers in Ballarat for the #RoadNats time trials on Wednesday… and not just the elite races 🙄