He’s an interesting one is Mr David Millar. Maltese born champion British cyclist, who became a drug cheat, who got busted by Police in Bidart France (near Biarritz) in 2004, who became a suspended pariah, who did his time, who was born again and became an anti-doping saviour, and finally in 2012 turned TDF stage winner – clean this time.

The candidness of his confession and continued reminders of his dark past are like a beacon of light in the quagmire that is World cycling, post Lance. When so many have done everything they can to sweep things under the carpet, Millar has chosen to do the exact opposite, figuratively ripping up the carpet so there’s nothing but his exposed floorboards for all the world to see. This is who I was. This is who I am. Warts (or should that be ‘saddle sores’?) and all.

Not surprisingly, this attitude is why many people all over the world admire him. But not me. I admire him for the eye-poppingly honest (and yes, generally expletive-laden) way he’s embraced social media. And for the amount of times he’s had me rolling around laughing as a result. Few have his ability to use 140 characters in such a dry way.

For example, just an hour or so after USADA released its forever quotation marked “Reasoned Decision”, he tweeted:
I shit you not, my wife has just sent me to the supermarket to get bread and water.
Genius.

He’s no pioneer, of course. Tens of thousands of celebrities from all walks of life have embraced Twitter in recent years (at least via their shadow writing agents). Lady Gaga and Justin Beiber have over 31 million followers at the time of writing, whilst Mr Millar has a comparatively measly 107,780. But Millar has done something that’s as rare as a clean cyclist in the 1990s: convey a genuine sense of himself through his tweets. And that warrants considerable kudos. I’ve never met the guy. But I feel like I know him. He’s candid, funny and more frank than, well, a Schelck. 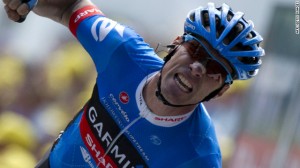 If you’re into cycling and don’t already follow the guy, do yourself a favour and start (@millarmind).
I’ve attached a collection of some Mr Millar’s work. Enjoy….

Mates. Bikes. Sunshine.
Great to chat earlier with this legend (just out of Covid iso in Switzerland) about his role as an ambassador for the 2022 UCI Road World Championships in Wollongong next month. Can. Not. Wait. 🌈🌈🌈
Chances are Mavi Garcia had a worse day than you 😬 #TDFF
Same day. Same country. Two very different tales. The agony and the ecstasy of le Tour.
… and it happens again, this time on the biggest stage of them all. Doh! 🤦‍♂️
…and 11 years on, @the_real_cadel has company at the Grand Tour winners’ table. Well bloody done @jhindley_ 🏆🇮🇹👏🏼👏🏼👏🏼
Why so serious? @jay_vine3 takes 2nd on GC in Norway despite a nasty crash on the final stage 🇳🇴 Good stuff Aussie 👏🏼👏🏼👏🏼
Reviews coming soon to @bicyclingaustralia 👍🏼👎🏼
The ‘twang’ of imminent doom. No ride for me this morning 😬😞
New (Koori) kit day thanks to @prism.bike & 2015 @naidocweek Artist of the Year @darendunnofficial Funds from every sale help to support Darren’s “Get Black on Your Feet” program. Love it guys 👍🏼
Cheeky fans left some rather interesting road markings at @amstelgoldrace #Wanksy on tour, perhaps 🤔
Out stalking cyclists (and good coffee) this morning in Launceston 📷 for @bicyclingaustralia 👍🏼 Always a pleasure ☕️